Most of us drive our cars and don’t really think about the history and development of the technologies that created them. The history of automotive brakes contains inventors, engineers, and rebels who dared to dream of something amazing. Let’s look at the evolution of automotive brakes, including; Drum, Disc, ABS, and Regenerative Braking Systems. 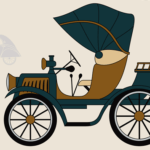 Over the years, engineers have designed, tested, and refined many different types of braking systems. In the beginning, motorized vehicles traveled so slowly they did not even use brakes. As engines developed and fuel technologies improved, autos started traveling at speeds that required a stopping mechanism.

At first, wooden blocks operated with a lever created friction against steel-rimmed wheels, slowing down the vehicle. This method worked until the late 1890s when the Michelin brothers introduced rubber tires. Then steel-rimmed wheels and the wooden block braking system became obsolete, which paved the way for new braking innovations.

The foundation of the modern braking system in automobiles starts with Drum Brakes. Wilhelm Maybach designed the first drum brake, which Gottlieb Daimler utilized in 1899 – 1901. It was a very basic design in which he anchored a cable to the vehicle’s chassis and attached it to the rotating drum on the wheels.

However, Louis Renault, a French manufacturer, refined the drum brake system in 1902, by adding brake shoes, brake shoe levers, and a cable. This created friction between the shoes and drum connected to the rotating wheel. 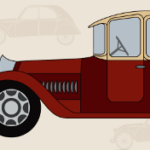 William Lanchester patented the first disk brakes in 1902. It was an unpopular method because of the loud screeching noise caused by the copper brake pad grinding against the steel disk. Due to the lack of a booster, it also required an increased amount of force compared to self-energizing drum brakes. However, Herbert Frood resolved the screeching noise, about five years later, by using an asbestos brake lining.

Then, in 1949, the U.S. manufacturer, Chrysler offered a form of disk brakes as an option on select production model vehicles. Their design utilized a pair of disks that spread apart and rubbed against the inside of a drum. This design lessened the amount of force needed to activate the brakes while improving the pad contact area compared to drum brakes. On the other side of the world, European automotive manufacturers were also busy equipping cars with disk brakes. For example – Jaguar C-Type in 1952, Austin Healy 100S in 1953, and Citroën DS in 1955.

The early aircraft and automobile industries understood the need for anti-lock braking systems to stop vehicles in emergency situations. Consequently, the first Anti-lock Braking System (ABS) was a fully mechanical system developed in 1929 by Frenchman Gabriel Voisin for aircraft use. Alternatively, Bosch-Mercedes developed and patented an electronic ABS for automobiles in 1936. Unfortunately, it never reached beyond the testing phase.

However, it wasn’t until 1958 that Jensen Motors developed and installed a viable automotive ABS system into the Jensen FF automobile. They based their work on British Maxaret System’s aircraft design. Lastly, Mario Palazzetti, during the 1960’s at the Fiat Research Centre, was the most influential on the modern anti-lock braking system. Most vehicles today carry his basic ABS system design. 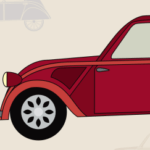 The American Motor Car Company (AMC) created an electrical energy regeneration brake in 1967 for their experimental electric car, the AMC Amitron. Toyota was the first auto manufacturer to commercialize regenerative technology in their Prius series hybrid cars. Since then, RBSs have evolved, and most electric & hybrid vehicles and many gas-powered automobiles use them in conjunction with friction braking.

Wentworth Automotive is a family-run auto repair shop in San Diego, CA, in business since 1998. We hire ASE Certified & Master Mechanics and use the highest quality auto parts in our brake repairs and maintenance services. Your safety depends on the mechanical condition of your automobile. That’s why we make it our priority to provide exceptional service, experienced technicians, and our guarantee that you’ll be satisfied with your brake service.

When it’s time for your next brake maintenance service, or if your brakes feel squishy or start squealing, Wentworth Automotive is here to help. Contact us today at (858) 541-1044 or online to schedule your brake service appointment.

We will discuss the finer points of drum brakes: How they work, the best way to care for them, maintenance intervals, and repair options.

Have a Car Question? Call Us! 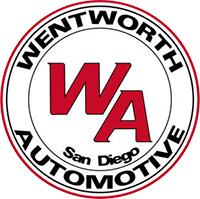